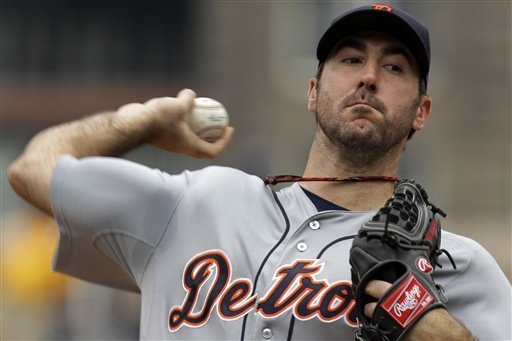 Things didn’t get off to a great start this afternoon for Kevin Correia.  Just three pitches in, he and the Pirates were trailing 2-0, and the Detroit Tigers added a late run which would be the difference as they knocked off the Bucs atPNCPark.

Detroitavoided a series sweep to the Pirates with a 3-2 victory in front of a crowd consisting of a lot of Tigers’ fans.  Quintin Berry’s two run homerun in the first inning was the difference in the game until the seventh inning, and, after the Bucs tied the game, Delmon Young’s RBI single scored Berry, which would be just enough for the Tigers to hold on to the win.

Coming into the game this afternoon, the Pirates and their fans realized it was going to be an uphill batter.  After all, they were facing Justin Verlander, last year’s A.L. Cy Young winner and MVP, and in their matchup earlier this season, he took a perfect game into the ninth inning, only to be spoiled by a flair single by Josh Harrison.

Verlander was, once again, masterful this afternoon, tossing a complete game, while giving up two runs on five hits, striking out seven and walking one batter.  He lowered his ERA slightly to 2.52, while winning his eighth game of the season.

After setting the Pirates down handily through the first six innings, Verlander ran into some trouble in the seventh.  After Pedro Alvarez smacked a single up the middle for the team’s first solid contact of the game, Garrett Jones hammered a pitch over the wall in right center field, tying the game, 2-2.  The Bucs got another hit in the inning, but the rally sputtered and that was the last serious threat made to Verlander and the Tigers.

Despite the loss, the Bucs got a quality start from Kevin Correia, who gave up two runs on six hits through six innings.  After the first two batters of the game, he pitched solidly, giving up just four hits over the next five innings.  But with an ace on the mound like the Tigers had today, that minor slipup to start the game proved to be too much to overcome.  Chris Resop was tagged with the loss, giving up the go-ahead run in the eighth inning, while Juan Cruz pitched a perfect ninth inning in relief.

While the Pirates were unable to finish off the Tigers today and complete the sweep this weekend, it was still another successful series, and home stand.  They were 4-2 on this home stand, wrap up Interleague Play with a 10-8 record, and have won eight of their last nine series.  They are five games over .500, one game back of the Cincinnati Reds in the N.L. Central, who lost to the Minnesota Twins this afternoon.

The Bucs embark on a very interesting road trip, beginning tomorrow for the start of a four-game series against the Philadelphia Phillies.  Stay tuned for all the recaps and reactions, right here at Fans From The Stands!