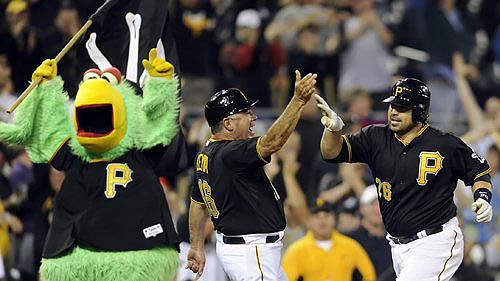 The Pittsburgh Pirates have built the bulk of their roster through draft picks and the minor league system.  Further, with names like Jose Tabata, Neil Walker, Andrew McCutchen, and Pedro Alvarez, the majority of the contributions come from this young core group of budding ball players. Last night, however, two veterans proved to be the difference for the Bucs as they beat the Washington Nationals in a thriller at PNC Park.

A.J. Burnett pitched one of the worst games of his career last week against the St. Louis Cardinals, giving up 12 runs in less than three innings.  But manager Clint Hurdle, as well as the rest of the Bucs’ staff and roster, wasn’t concerned at all about Burnett’s ability to bounce back in a big way in his next start.  And no wonder.  The right-hander pitched eight innings last night, giving up just two runs on six hits, while walking one and striking out ten batters.  He showed the type of command and dominance that the Bucs were attracted to in the offseason.  Nights like Tuesday prove that A.J. still has the arm, the determination, and the ability to be a tremendous pitcher in this league  Here’s a clip from a post-game interview with Burnett, courtesy of OVAthletics:

There’s no denying that Rod Barajas has been terrible at the plate this season.  His batting average (.141) is horrible and he’s by far one of the most disappointing players on the Pirates’ roster so far in 2012.  That being said, Clint Hurdle had been mentioning that he’s seen progression at the plate lately from his veteran catcher.  True, he’s hit a few laser line outs as well as some towering fly balls to the warning track in recent games.  But still, we’re giving a guy credit for hitting hard outs?  Well the crowd last night at PNC Park wasn’t giving him credit at all; In fact, they nearly booed him off the field in the seventh inning when he made his third out of the game.

[box_dark] “I’d love to be doing better.  Nobody wants to hear that from your home fans.  I was in a situation where I was able to put them back on my side.  Hopefully they’ll give me a little more leeway,” Barajas said about the boos. [/box_dark]

How did he put them back on his side? Well, in the bottom of the ninth inning, with two outs and runner on third, against a team who had just taken the lead in the top half of the frame, Barajas stepped to the plate and hammered a 97 mph fastball on the first pitch of the at-bat deep to left field, just inside the foul pole, to give the Pirates a much-needed walk off victory.  Here is a clip of Barajas’ post-game interview, once again courtesy of OVAthletics:

Does this help us forget about Barajas’ struggles at the plate this year?  Absolutely not.  But it does give a glimmer of hope that this will jump-start his production with the bat.  One thing’s for sure…it’s something the Bucs desperately need.

The Nationals and Pirates will face off in the second game of the series tonight at 7:05pm.  Ross Detwiler will be on the mound for Washington against Pittsburgh’s Erik Bedard.