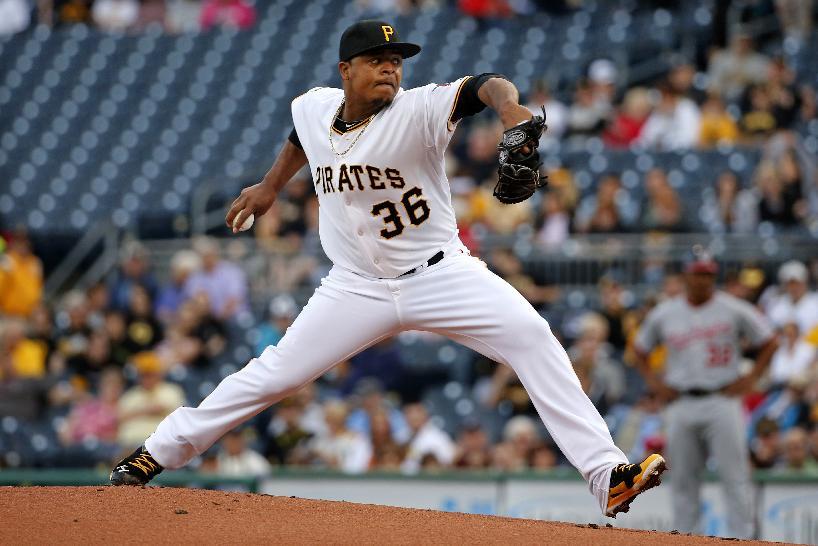 One night after the Pittsburgh Pirates used a flurry of offense to pick up a win, they would use pitching and defense to start a four game series with the Washington Nationals.  Pitching was stellar tonight in holding Washington to only one run on five hits.  The defense was key as well, with some webgems made by two of the Pittsburgh outfielders.

Edison Volquez started for the Pirates tonight and looked more like the April version of himself.  He would score the first run of the game after being on third when Andrew McCutchen was hit by a pitch with the bases loaded.  While on the mound, he lasted six innings allowing one run on three hits while walking two and striking out four.  That lone run came in the fourth when Ian Desmond homered to right centerfield.

The Buccos retook the lead in the fifth on a McCutchen single that scored Josh Harrison.  Harrison would then add an insurance run in the eighth with a single that scored Chris Stewart.  Harrison made the first of two spectacular catches tonight.  His came in the sixth inning off the bat of Wilson Ramos.  The game would end on a sliding catch by McCutchen to cap off a 3-1 victory for Pittsburgh and earn Mark Melancon his eighth save of the year.

Complete change of game from one night to the next, but both resulted in wins and that is the most important thing.  A roster move was made today when Russell Martin was brought off the DL.  He served his one game suspension tonight and should be back behind the plate tomorrow night.  In order for that move to occur, the Pirates designated Wandy Rodriguez for assignment.  Since the rotation is one man down, expect to see either Brandon Cumpton or Jeff Locke fill that spot.