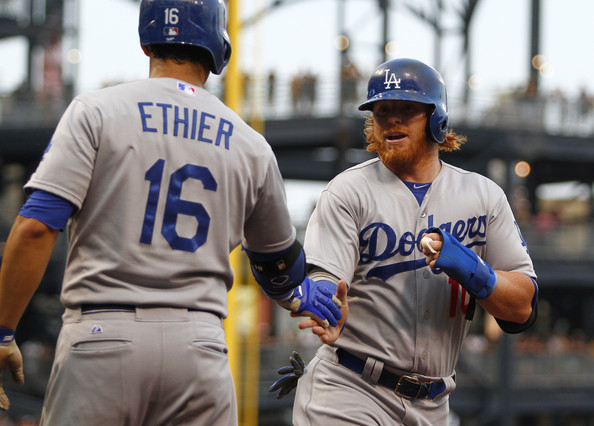 After completing a three game series sweep over the weekend, the Pittsburgh Pirates welcomed the Los Angeles Dodgers to town for a highly anticipated three game series at PNC Park. Both teams are fighting for their respective division crowns and, as the second half of the season continues, every series is as important as the next. While the Dodgers are battling with the San Francisco Giants in the N.L. West, the Pirates are in a dogfight with the Cincinnati Reds, St. Louis Cardinals, and Milwaukee Brewers.

Tonight, the Dodgers got to Edinson Volquez, built an early lead, and withstood a few Pirates comeback efforts in a 5-2 victory at PNC Park.

It was a bad combination of a stacked Dodgers lineup and some bad luck for Volquez. Despite playing without Yasiel Puig and Hanley Ramirez, L.A. still puts an impressive lineup on the field, and tonight, they got contributions up and down their roster.

The Dodgers scored two runs in the third to get the scoring started. Matt Kemp’s RBI double scored Justin Turner, and Andre Ethier’s ground out scored Adrian Gonzalez. They added three more runs in the fourth inning. Turner’s double scored A.J. Ellis and Dee Gordon. Gonzalez’s RBI single scored Turner, and it looked like the rout was on at PNC Park.

As they’ve done all season, though, the Pirates battled back, scoring a pair of runs in the bottom of the fourth. Russell Martin’s single scored Andrew McCutchen, and Jordy Mercer singled home Neil Walker to cut the lead to 5-2. That is the closest the Bucs would get to a comeback.

This wasn’t the ideal way for the Pirates to kick off this series against the Dodgers. Though they were missing two of their most productive offensive players, L.A. was the better team tonight, and they took an early lead and didn’t let it slip away in the later innings. With the loss tonight, it puts that much more pressure on the Bucs to win the next two games if they still want to take the series.

The two teams will match back up tomorrow evening at 7:05pm at PNC Park. Vance Worley will make the start for Pittsburgh against the Dodgers’ Josh Beckett, who is expected to come off the disabled list.