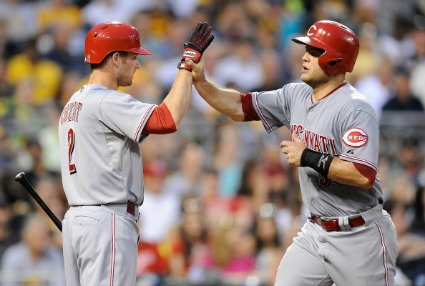 Skip Schumaker had three RBIs, including a sacrifice fly in the top of the second inning, scoring Jay Bruce to put the Reds on the board.

Cincy put the game away in the third inning with a seven run outburst.  The scoring was highlighted by a Brandon Phillips RBI double and RBI singles by Schumaker, Zack Cozart, and Billy Hamilton.  Skip added another RBI with a single in the fourth, scoring Devin Mesoraco.

The Pirates got on the board in the fifth inning.  Pedro Alvarez led off with a double, and scored on an RBI single by Gregory Polanco.  Two innings later, the Pirates got the bases loaded with no outs.  Starling Marte grounded into a fielder’s choice, allowing Jordy Mercer to score from third.  At that time, the skies opened up and the rain came down…hard, delaying the game with the Reds occupying a commanding 9-2 lead.  After an extensive delay, the Bucs added another run in the seventh, cutting the lead to 9-3.

Cincinnati added two more runs in the ninth inning off Travis Snider, who came in to pitch in relief.  Although he did give up two runs and two walks, he did set Joey Votto down on pitches for his first career strikeout.  The Reds wrapped things up in the bottom of the ninth, despite giving up another run, to secure an 11-4 win.

This was a horrible game for the Pirates, falling for the second time in two days to the Reds.  In what has been a troubling season thus far, the Bucs have struggled against N.L. Central opponents, and the Reds are no different.  They will now look to avoid a sweep tomorrow afternoon against Cincinnati.  First pitch is scheduled for 12:35pm.