Walk Off HBP Give Pirates Victory Over Cubs 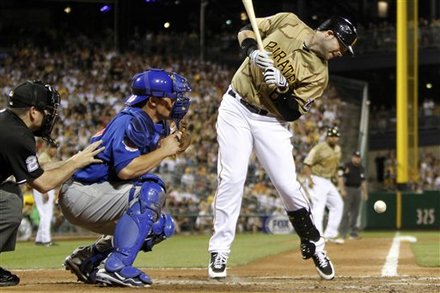 Over the years I have seen the Pittsburgh Pirates win and lose baseball games in a variety of ways.  Tonight’s victory over the Chicago Cubs was a first.  With the bases loaded, two outs, and two strikes, Matt Hague was hit by a pitch that brought home Jose Tabata for the 3-2 win.

The pitching was solid for both teams tonight and either pitcher would have been deserving of the victory.  Kevin Correia would go 6.1 innings allowing two runs on five hits while striking out and walking two batters.  Former Buccos pitcher Paul Maholm started for the Cubs going five while allowing two runs on four hits, walking five and striking out two.  Joel Hanrahan earned his second victory of the season, while pitching the ninth inning.

The Pirates and Cubs offenses were both down tonight earning six hits apiece.  Pittsburghwent up early with two runs in the third inning.  A Pedro Alvarez single brought home Tabata, which was then, followed up by a Neil Walker sacrifice fly that scored Andrew McCutchen. Chicago scored a run in each in the fourth and fifth inning to tie the game.

Final game of this series will take place tomorrow afternoon at 1:35.  Matt Garza with pitch for the team from the north side of Chicago, while the Pirates will counter with Erik Bedard.  I know we would all love to see this offense give Bedard the run support he rightfully deserves.