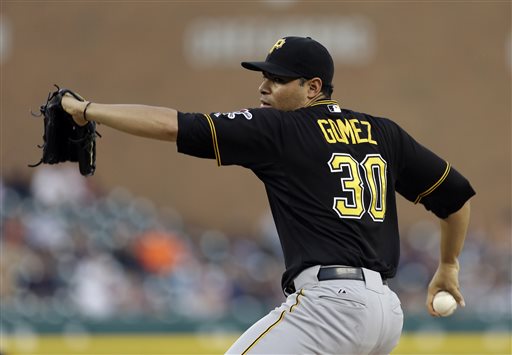 After tonight’s game between the Pittsburgh Pirates and the Detroit Tigers, Jeanmar Gomez can relate to some of the other Bucs’ starting pitchers.  Just like A.J. Burnett, Wandy Rodriguez, and others have felt the frustration of the lack of run support, Gomez saw his incredibly impressive start tonight bested by an even more superior performance from Tigers’ starter Rick Porcello.

Gomez pitched seven scoreless innings, and Neil Walker hit the game winning homerun in the 11th inning, as the Pirates beat the Tigers 1-0 on a rainy night at Comerica Park.

It took until the eighth inning for the Pirates to have multiple base-runners in the game.  Pedro Alvarez led off with a single, and after a Gaby Sanchez strikeout, Travis Snider drew a walk.  The Bucs had runners on first and second with only one out.  Unfortunately, the worst possible thing happened…Clint Barmes grounded into an inning-ending double play.

The two pitching staffs were absolutely dominant on this night…until the 11th inning, at least.  Walker crushed a solo homerun to right field, giving the Bucs a 1-0 lead.

Jason Grilli struck out the side in the bottom half of the inning to clinch a huge victory for the Bucs.  These are the types of games the Pirates need to win…games when they don’t necessarily play their best, but find a way to win.  Walker, when healthy, is undoubtedly one of the best second basemen in all of baseball.  Tonight was a huge win against an incredibly talented team.

The Pirates and Tigers travel to Pittsburgh for the next two games of the series, beginning tomorrow night at PNC Park.