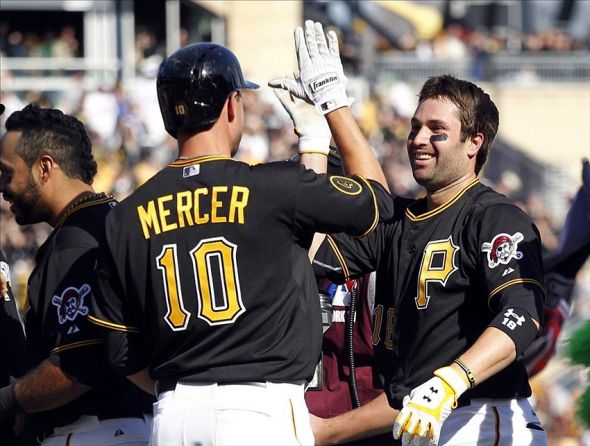 Last season, the Pittsburgh Pirates won a number of dramatic games on their way to a 94-win season and a playoff appearance for the first time in two decades.  This afternoon in the first game of the 2014 season, Neil Walker gave the Pirates fans another memory on the North Shore.

Walker’s walk off solo homerun in bottom of the 10th gave the Bucs a 1-0 victory over the Chicago Cubs in the first of a three game set at PNC Park.

It was a frustrating game to watch for those who enjoy offense at the plate, as the two teams combined for just the one run and twelve hits in 10 innings of baseball.  Ten pitchers were used total, including opposing starters Jeff Samardzija and Francisco Liriano.  Samardzija once again stifled the Bucs in front of their home crowd, tossing 7 shutout innings, giving up just five hits and two walks.  Liriano struggled with his control and, in turn, a high pitch count, but battled his way through six shutout innings, giving up four hits and three walks while striking out ten batters.

The Cubs left a lot of opportunities to take the lead slip by in the middle innings, while the Pirates were also unable to sustain any type of offense rally.  Travis Ishikawa led the Bucs with two hits, while Andrew McCutchen, Starling Marte, Russell Martin, and Walker each had a hit.  As the game continued and with both offenses struggling, it became apparent that this game would be decided by a mistake pitch and/or a heroic swing of the bat.  Walker’s solo blast over the right field wall brought the sold out capacity crowd to their feet, and effective brought the house down.

This was a great way to kick off the 2014 regular season.  After all the dramatics of a year ago, the fans who made their way to PNC Park this afternoon were once again treated to an incredible finish on the North Shore.

After a day off tomorrow, the Bucs and Cubs take the field for the second game of the series on Wednesday evening.  Edwin Jackson takes the hill for the North Siders, opposing Charlie Morton of the Pirates.  First pitch is at 7:05pm.