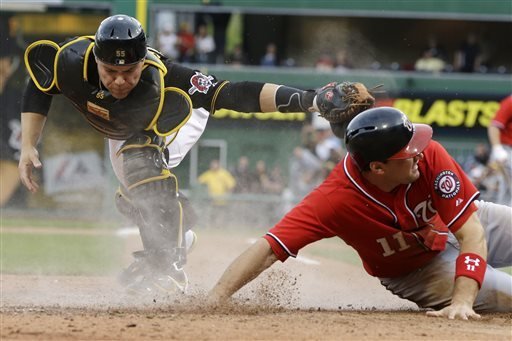 The Pittsburgh Pirates were looking to wrap up another series win at home today when they took on the Washington Nationals.  In order for that to happen they would need another strong start from Jeff Locke and the rest of the Bucco bullpen.

Check out our predictions for today’s action in our pregame show:

Locke was a little erratic during his five innings of work.  Three hits and three walks lead to four runs crossing the plate.  Two of those runs were sacrifice flies that occurred in the third and fourth inning.  A shallow single to center field with the bases loaded in the sixth allowed the Nats to tie the game at four.

The Pirates offense was using the long ball to score their runs.  Starling Marte hit a two run homer in the third that put the Buccos on top 2-1.  With the game tied at two in the fifth, Clint Barmes put Pittsburgh on top 4-2 with a two run shot to centerfield.

The game would be tied in the ninth inning with one out and runners on second and third.  Tyler Moore would then hit the go ahead sacrifice fly to right field that would put Washington on top.  The Pirates put up little fight in the ninth as they would go 1-2-3.

Here are our post game comments from just minutes after the final out:

This three game series will wrap up tomorrow afternoon at 1:35pm.  With an off day on Monday, there is no excuse for the Buccos to leave it all out on the field tomorrow as they look to take this series.  Wandy Rodriguez will look to improve on his last outing when he takes the mound.