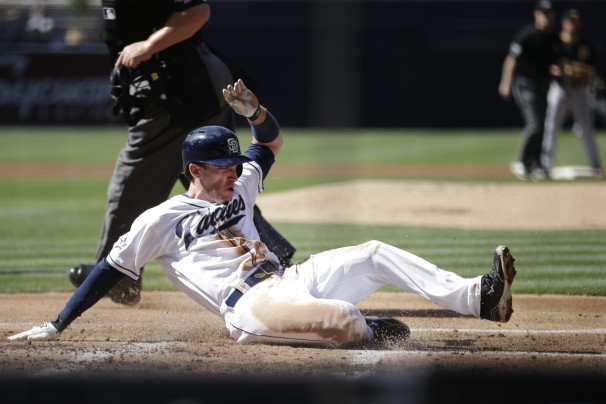 It’s tough to beat a team three times.  The Pittsburgh Pirates concluded a successful road trip with a frustrating 3-2 loss to the San Diego Padres tonight at Petco Park.  Despite only giving up one hit throughout the entire game, the Bucs were unable to eliminate crucial mistakes that ended up costing them a potential victory.

Francisco Liriano was horrible tonight, struggling with his control from the very beginning.  He gave up three runs (two earned) on just one hit, but with six walks through five innings.  Although he did strike out seven batters, he didn’t utilize the defense behind him.

Andrew McCutchen cut the Padres’ lead in half with one swing of the bat in the fourth inning.  His majestic solo homerun narrowed the lead to 2-1.  Unfortunately, Liriano gave the run right back in the bottom half of the inning.  Without giving up a single hit, he walked four straight batters, the last of which allowing Medica to score.

Harrison’s RBI double in the fifth scored Jordy Mercer, cutting the lead to 3-2.  Unfortunately, the Bucs wouldn’t get any closer.  They did get the tying run on base in the ninth inning after a Pedro Alvarez single, but Russell Martin was called out on strikes to end the game.

This was a very frustrating loss for the Pirates.  They were clearly the better team throughout this series, but today, they beat themselves.  It is almost mind-boggling to think that the Padres were able to score three runs and win a baseball game while tallying only one hit.  Liriano falls to 1-6 on the season with a putrid 4.54 ERA.

Harrison led the Bucs’ charge with three hits, including a triple, two doubles, and an RBI, raising his average to .317 on the season.  He has been red-hot, clearly taking advantage of a tremendous opportunity.  While Cutch only had one hit, he hit two other fly balls to deep parts of the outfield, and it is an encouraging sign that the team’s best player may be heating up.

After a much-needed day off tomorrow, the Bucs will return to PNC Park for a three-game series against the first place Milwaukee Brewers.