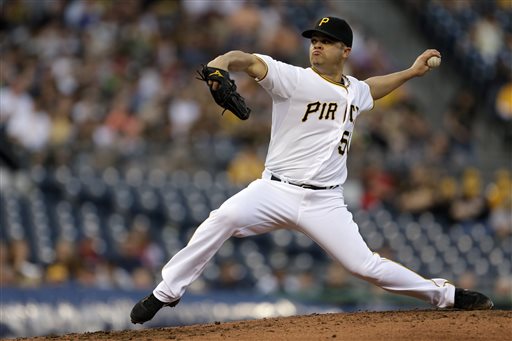 For the second straight night, the Pittsburgh Pirates have seemed to find the answer to their krptonite that is the Milwaukee Brewers.  Pitching.  When these two teams met at Miller Park earlier in the year it was clear that the Buccos did not have the offensive firepower to keep up with the Brew Crew bats.  To counter that, Pittsburgh got a strong starting effort from Wandy Rodriguez with the setup and close of Mark Melancon and Jason Grilli.

Rodriguez had a stellar start tonight in picking up his fourth win of the year.  He lasted seven innings giving up one run on six hits, while striking out five and walking one.  Wandy stayed out of trouble for most of the night.  Only two times did Milwaukee get to him, and only converted once.  The first time was when Johnathan Lucroy led off the fourth with a triple, but could not score because of two pop outs and a ground out.  The only run that the Brew Crew collected came in the seventh on a Rickie Weeks home run.

It took six innings for the Pirates to get to starter Yovani Gallardo.  Starling Marte led the inning off with a single and then moved to third on a wild pitch.  Andrew McCutchen would walk, and then steal second.  Then Gaby Sanchez would reach base with a walk.  This allowed Neil Walker to drive in Marte and Cutch on shallow single to center field.

Walker then was able to help Cutch cross the plate later on in the eighth, when he hit a ground ball to second that Weeks would commit a throwing error on.

With a two run lead, the Melancon, Grilli combo shut the door with two scoreless innings, striking out three of the six batters they faced.  Grilli picked up his 16th save of the season.

Another big win tonight for Pittsburgh, while it may be early to say the curse is broken, this has to give the Buccos confidence in knowing that they can defeat Milwaukee.  Francisco Liriano makes his PNC Park debut in a Pirates uniform tomorrow night.  First pitch is set for 7:05pm.