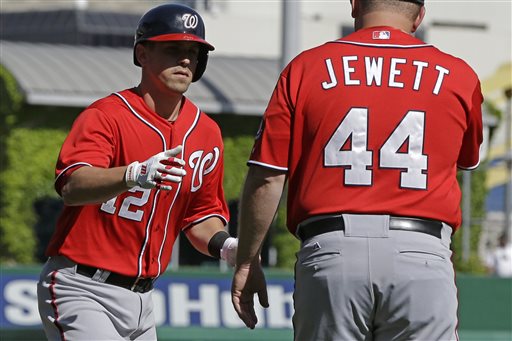 After a difficult loss to the Washington Nationals yesterday, the Pittsburgh Pirates turned to Wandy Rodriguez to lead them to a series victory at PNC Park.  Unfortunately, Wandy’s struggles, along with the bullpen, continued this afternoon, as the Nationals beat the Bucs 6-2 on a gorgeous day on the North Shore.

Check out our predictions for this afternoon’s game on our pregame show:

Wandy was inefficient from the start today, pitching a total of 117 pitches through his six innings of work.  He gave up three runs on six hits with one walk and seven strikeouts.  With the loss, he dropped to 2-2 on the season.

Jose Contreras made his Pirates debut this afternoon, giving up a hit and two strikeouts in his one inning of work.  Bryan Morris, unfortunately, didn’t have much success, giving up a three-run homerun to Tyler Moore in the eighth inning.  Vin Mazzaro pitched a scoreless ninth in a losing effort.

Pittsburgh got off to a great start this afternoon.  Starling Marte hit the first pitch from Nationals’ starter Gio Gonzalez over the wall for a solo homerun.  But after the Bucs loaded the bases with no outs, they were unable to push a single run across the plate.  Russell Martin and Michael McKenry struck out, and Brandon Inge grounded out to end the inning, much to the disappointment of the PNC Park crowd.

Danny Espinosa was the hitting star of the day for Washington, going 1-3 with a homerun and three RBIs.  His sacrifice fly in the second inning and his two run homer in the fourth put them in front 3-1.  Martin’s RBI double in the sixth put the Pirates within a run, 3-2, but Moore’s three-run blast in the eighth put the game out of reach.

After the game, we gave our reactions to the Pirates’ loss in our postgame show:

This was a frustrating game to watch for Pirates fans.  After a great start to the weekend on Friday with a 3-1 victory, the games played yesterday and today were maddening to see.  Both of these games were winnable, but mistakes, walks, and ineffective bullpen appearances by some of the relievers cost Pittsburgh.  After a day off tomorrow, the Bucs will return to action in a short two-game series against the Seattle Mariners on Tuesday and Wednesday.