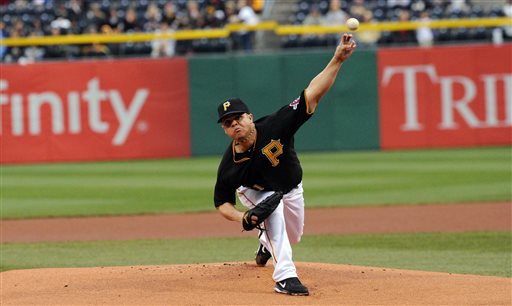 Rodriguez made his third appearance of the season, and first since injuring his hamstring on the Bucs’ first road trip of the season.  Tonight, against one of the very best offenses in the entire league, he was incredible.  He surrendered just one hit and struck out five batters in his seven innings of work.  He won his second game of the season (2-0), dropping his ERA to just 0.56 for the season.  Mark Melancon and Vin Mazzaro finished things off in the eighth and ninth innings, respectively.

Pedro Alvarez has had a horrible start to the 2013 season…but the past two nights, he’s shown signs of life.  For the second straight game, Pedro hit a homerun, and, just like last night, he left the crowd stunned by the length of the hit.  His two-run homerun in the second inning cleared the stands and bounced on the riverwalk, giving the Bucs an early 2-0 lead.  Jose Tabata’s RBI double scored Russell Martin, who reached base on a double of his own off the wall.  The Bucs led 3-0 after two innings.

Pittsburgh chased Braves’ starter Tim Hudson from the game in the fifth inning.  Tabata walked to lead off the inning, followed by a single by Travis Snider and a walk to Andrew McCutchen to load the bases.  Garrett Jones smacked a two run single to stretch the lead to 5-0.  After adding a run for good measure later in the inning, they led 6-0, which would be the final score.

This was a nice response by the Pirates tonight against a Braves’ team that is playing as well as anyone to start the season.  It’s nice to see the offense continuing to produce despite McCutchen being quiet early, and also Starling Marte getting the night off.  Neil Walker continues to swing his hot bat.  After going 2-3 tonight, including a triple, single and a walk, his average is now at .263.  Snider and Jones are swinging the bats very well, hitting .333 and .326 respectively.  Alvarez and Martin are over .100 finally with a short stretch of promising games.

The Bucs will be back in action in the third game of this four game series with the Braves tomorrow night at PNC Park.  James McDonald will take the hill for Pittsburgh against former Bucco Paul Maholm.  First pitch is slated for 7:05pm.