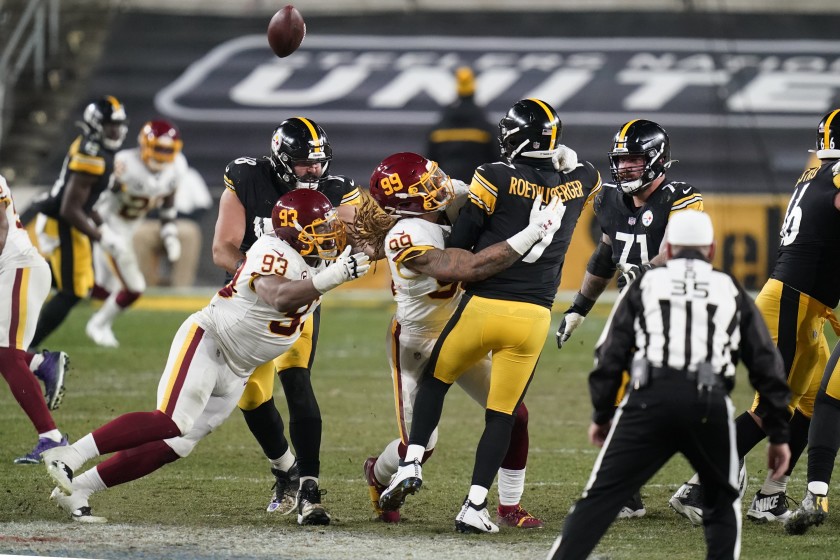 The Pittsburgh Steelers had this coming.  While they have been the only undefeated team in the NFL for weeks and had found ways to win every game this year, they haven’t been playing well for quite awhile, narrowly escaping with victories over and over on their way to an 11-0 record.  But tonight at Heinz Field, their miscues, sloppy play, and inability to put the game away finally cost them.

The Washington Football Team rallied from 14 points down to beat the Steelers, 23-17.  It was a huge win for Washington, as they improve to 5-7 and are atop the NFC East with the New York Giants.

For Pittsburgh, it is not a devastating loss, but certainly a surprise.

It was a sluggish start for both offenses tonight, as neither team could develop any rhythm in a scoreless first quarter until Ben Roethlisberger hit Diontae Johnson from 3 yards out.  The score capped a 14 play, 77 yard drive, giving the Steelers a 7-0 lead.

After a huge four down goal line stand by the Washington defense, the Steelers forced a three and out to get the ball back at midfield.  The very next play, Roethlisberger hit James Washington for a 50 yard touchdown to make it 14-0.

Washington got on the board late in the second quarter with a 49 yard field goal to make it 14-3 at halftime.  They opened the second half with a drive that took nearly 7 minutes, ending with a touchdown run by Peyton Barber to make it a 14-10 score.

A yard field goal by Matthew Wright opened the fourth quarter, giving the Steelers a 17-10 lead.  But Washington responded as Alex Smith hit Logan Thomas from 15 yards out to tie the game with just over nine minutes remaining.

After the Steelers turned the ball over on downs, Washington marched down the field and took the lead with a yard field goal, making it a 20-17 game with just a few seconds from the two minute warning.

On the very first play, Roethlisberger’s pass was deflected and intercepted.  Washington was able to run most of the clock out, adding a field to make it 23-17 with just 17 seconds remaining.  The clock ran out on Ben and the offense, as they fell for the first time this season.

This was a disappointing and surprising loss for the Steelers.  While it would be difficult to imagine this team going undefeated this season, one would think their first loss wouldn’t come against a team with a losing record at Heinz Field.  But again, Pittsburgh hasn’t been playing well the last few weeks, and, on a short week, they didn’t have their best performance and they paid for it.

Things won’t get any easier for the Steelers next week as they travel north to face off against the Buffalo Bills on Sunday night.