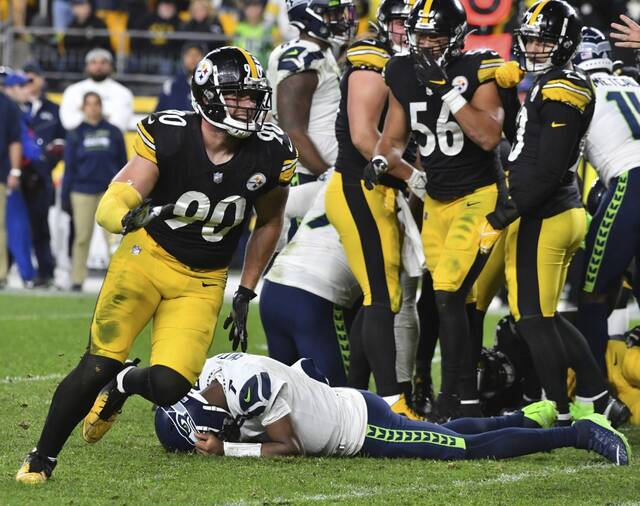 T.J. Watt got paid handsomely this offseason and on Sunday night he proved why he is so deserving of every penny.  Watt had a total of seven tackles, three pass deflections, and two sacks during the game.  His biggest play came in overtime when he stripped the ball from Seattle Seahawks quarterback Geno Smith, which led to the game winning field goal.

After a scoreless first quarter, the Pittsburgh Steelers jumped on the board with two second quarter touchdowns.  The first came at the 10:04 mark when Ben Roethlisberger connected on a 5yd touchdown pass to Najee Harris.  With a little over a minute left in the half Eric Ebron became the first Pittsburgh tight end to score a rushing touchdown.  The Steelers had a 14 point lead at the half and looked to be on their way to an easy victory, but nothing is easy for Pittsburgh fans.

Seattle made some halftime adjustments and finally got some points when Alex Collins rushed for a 2yd touchdown to cut the Steelers lead in half.  Four minutes later Chris Boswell kicked his first field goal of the night, this one from 27yds, to put his team up by ten.  The Seahawks would get the final points of the quarter when Smith threw a 1yd touchdown pass to Will Dissly.

The kickers were on display in the fourth quarter.  It began with Jason Myers tying the game with a 40yd field goal at the 13:04 mark.  Boswell gave the Steelers a late three point lead with a 52yd kick, but Seattle drove the ball down the field and had Myers tie the game with a 43yd field goal as time expired.  The last game of the day would be heading to overtime.

Neither team did much with their first possession of the extra period.  The Seahawks had the ball for the second time when Smith tried to rush up the middle, but lost the ball on a hit from Watt.  Devin Bush recovered the ball, and after the Pittsburgh offense got the ball in position for Boswell, he was able to send the faithful home from Heinz Field with a 23-20 victory.

With the win the Steelers get back to the .500 mark on the season and sit two games behind the Baltimore Ravens for first place in the division.  While I wouldn’t say this win puts Pittsburgh on the road to a playoff run, I do think they have the capability of staying in games with this defense.  The Steelers will now have a bye week before hitting the road for a Halloween matchup against their longtime rivals, the Cleveland Browns.