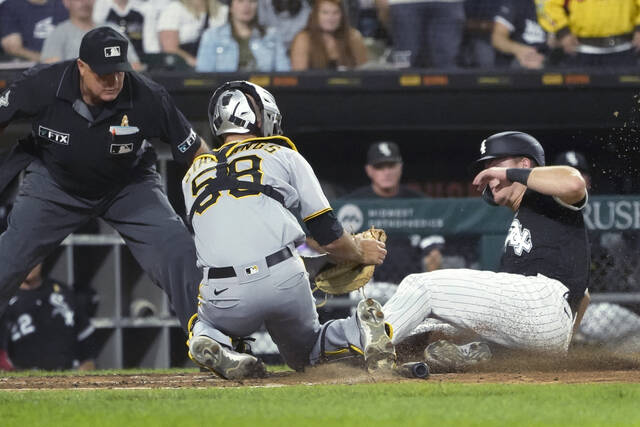 Tonight, the Pittsburgh Pirates wrapped up their short two game series with the Chicago White Sox.  These two teams split a two-game series at PNC Park earlier in the year and Pittsburgh was looking to do the same tonight, after a loss last night.  Chicago had other plans, as they jumped out to a three-run lead in the fourth and never looked back on their way to a 6-3 victory.

That three-run lead in the fourth inning came on one swing of the bat.  Gavin Sheets would launch a 369 ft. home run to right field with two runners on to give the White Sox the lead.  The Pirates plated their first run of the game in the top of the fifth on a Cole Tucker RBI single to right center.  That run was quickly canceled out in the bottom half of the inning.

A throwing error by Kevin Newman allowed Jose Abreu to score for Chicago’s fourth run of the night.  The fifth occurred on a Leury Garcia double to drive in Yasmani Grandal.  All five runs were charged to Max Kranick who pitched 4.2 innings, allowing five runs on eight hits with two walks and one strikeout.  White Sox starter Carlos Rodon worked five innings, giving up one run on five hits, while striking out five and walking one.

Pittsburgh was able to plate two more runs before the game was over.  Anthony Alford hit a solo home run in the seventh, and Jacob Stallings came through with an RBI single to score Tucker in the eighth.  Sheets would hit his second solo home run of the night in the bottom of the eighth to close out the scoring.

The Pirates used Anthony Banda, Shelby Miller, and Duane Underwood Jr. out of the pen tonight.  Banda pitched 1.1 innings allowing one hit with one walk.  Miller gave up a hit and struck out one batter while working the seventh.  Underwood Jr. allowed the home run to Sheets in the eighth.  Liam Hendricks picked up his 31st save of the year for the White Sox while collecting the final three outs in the ninth.

This was the story of two teams heading in opposite directions.  Chicago took advantage of a poor team to pick up two wins while on their journey to clinch a division title.  Pittsburgh is currently in the midst of trying to lock up another top five draft pick, so the loss isn’t totally bad.  The Pirates will now head to the north side of town to begin a four-game series with the Chicago Cubs beginning tomorrow night.